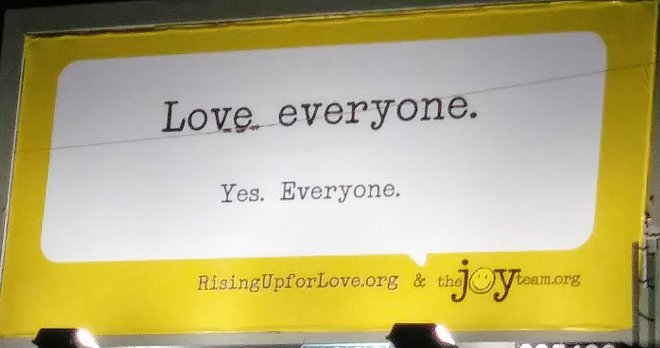 The Tolerance of Suffering

We have lost our way. We Humanity, we homo sapiens, we the last surviving hominid species on planet Earth. We have lost our way. The way that our species continued to evolve and thrive, the way that we evolved as primates in the time of a blink of a universal eye from primitive creatures that could not understand the mysteries of the universe around us, to the modern beings that we are now capable of creating tools and technology that have allowed us to see the universe and begin to grasp understandings of those Mysteries.

Today I read four different articles in the news, articles about science. Today our species looked at a black hole for the first time, captured it in an image that we were able to share at light speed around our globe announcing to the entire planet Earth that what a man named Einstein envisioned and imagined a hundred years ago and believed because his math gave him an understanding of the universe that allowed him to conceive something light years away that we could not see with our eyes or prove was there – today we can see with our eyes that it is real and it is massive.

Today it was announced that another ancient extinct hominid species was found to have lived in the Philippines 50,000 years ago. There were so many different kinds of humans that evolved on this planet, of them all, only we remain. We are the last of our kind.

And we ourselves are rapidly barreling towards our own self destruction. Because the same intelligence that gave us the ability to see the Black hole and to find artifacts and bodies of ancient other human species, is also the intelligence that allowed us to evolve and develop in a way that we created technology that made it possible for us to destroy life on our own planet, to destroy each other and ourselves.

We have lost our way Humanity, because we lost the gift that made our survival possible that was infinitely more important than the ones we worship. We have come to falsely believe that it is survival of the fittest, that it is take or be taken, use or be used, have or be had. We have lost our unique quality that allowed us to come together and survive together in a world where our survival is dependent on our ability to maintain and utilize our one greatest gifts – Empathy.

I don’t know when we lost that ability to the point that we have, but we can look at the world of pain around us and allow that suffering to continue. I don’t know when we collectively developed this tolerance for suffering. I wish I knew how to heal it. I wish I knew how to convince us that our survival depends on each other, Life itself may depend on our ability to come together and save ourselves and each other.

We have created our own destruction, and it may already be too late. It’s possible there maybe nothing we can do to prevent our own Extinction in the very near future, within my children’s lifetime. Within my lifetime. This is not Hysteria or alarmism. This is the Same Science that today allowed Humanity to see a black hole for the first time today.

I am in awe that this was even possible, and I’m heartbroken every single day as I see the suffering all around, as I feel the suffering Within Myself. I see the loss of empathy in our world and I see the tolerance for suffering and I cannot comprehend it.

I am an empath, I feel everything intensely and I feel through empathy. Through my hyperactive mirror neurons I feel the pain and suffering and joy, excitement, sadness, grief, hope, worry, fear, love and happiness of everyone around me, everyone I see on the street, everyone I look at, everyone whose voice I hear. Sometimes I feel like I am living in a thick viscous liquid of the emotions of everyone around me. And everything within me at every moment just wants nothing more than to stop the pain, stop the causes of suffering, and ease the hurt and heal the hearts and heal Life.

If I had one superpower for even one moment if I could Snap My Fingers and change the universe, the only thing I would want would be to touch every heart of every human and return our empathy, and take away our tolerance for suffering. I don’t think our intelligence can save us now, I think our only hope for survival, for the survival of Life on planet Earth, is the same thing that has been the reason for our survival before – our ability to care and feel compassion and feel empathy for the other beings that exist here with us and for each other and for ourselves.

It is only love guiding our intelligence and Empathy for the pain and suffering of others that can motivate us to use our gifts to Heal our world that can save us now. It has only ever been Love that could save us from ourselves.